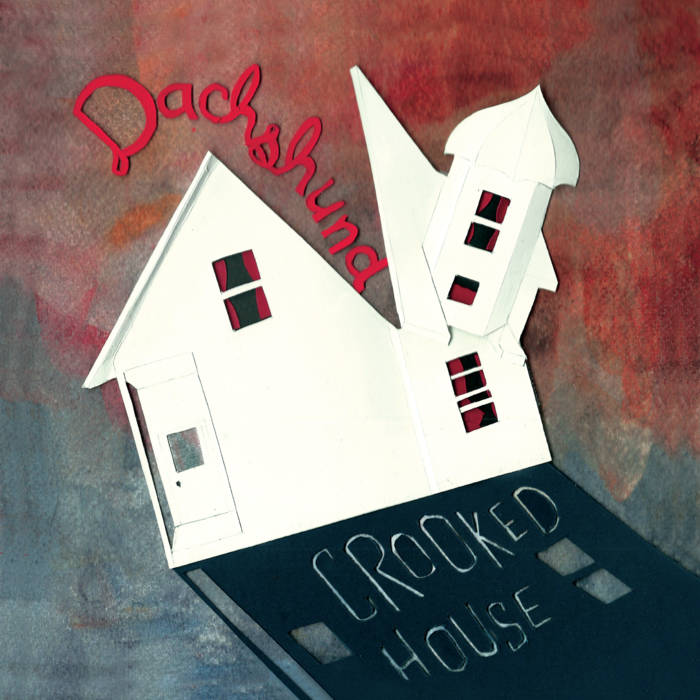 Tulsa rock quartet Dachshund has never quite fit alongside their local peers. In a scene dominated by jazz, roots-rock, blues, and country, they pursue a less-trodden path, fusing the grooves of progressive-rock and new-wave to the hooks of classic '60s pop and the '90s underground. While their 2011 debut found them wearing their influences more-or-less on their sleeves, their 2016 follow-up, "Crooked House," finds them moving into territory more distinctively their own.

Songwriters Ryan Dannar and Eric Hartley each have their own unique styles; Dannar often opts for a kind of Bowie-esque tunefulness, while Hartley's creations are often heavier and more direct. And yet, their styles complement each other well, and on "Crooked House" they often seem to be speaking from different ends of a kind of shared experience. Drummer Adam Karleskint and bassist Andy Jenson lend weight and authority to proceedings, bridging whatever stylistic gaps might otherwise be apparent with their nimble and persistent sense of groove.

Although the band is not calling "Crooked House" a concept album, there are some strong thematic threads woven throughout, addressing questions of identity, the role of the outsider, and the struggle to find meaning in a life lived outside the conservative Oklahoma norm.

Opening track "Landlocked State" handily sets the stage. By turns raucous and flowing, the song musically evokes the rolling hills and lakes and streams of Northeastern Oklahoma -- but Dannar turns these images against themselves, using them to describe a conflicted internal state of mind. What emerges is, on one level, a kind of love/hate letter to the band's native Oklahoma. But more than that, it's an existential expression of a near-(but not quite)-hopeless desire to escape from the repressive place one has no choice but to call home.

These threads resurface and develop in various ways throughout the album. In "The Wedding Guest" an invitation to a friend's wedding causes one lonely man to question such cultural institutions. In "We Fall," Hartley evokes the kind of numbing daily grind which spurs people toward vacuous escapism and chemical release. "Gary" finds Dannar examining a friendship which gradually turned sour. In "Stain," Hartley finds poetic resonance in the tragic aftermath of a car-accident.

The album's headier material is laced with a few all-out rockers -- "Vices" and "Vigilance" are nearly of a piece, constructed of chugging power-chords and an infectious quiet/loud dynamic. "Ichabod" is a serpentine evocation of a nightmare which stumbles into a campy, operatically-explosive chorus.

Closing out the set is "Factory," an epic barnburner which spins a sexually-charged sci-fi lyric over a bed of scrawling Sonic Youth guitars and a driving groove. At first loose and roiling with tension, then rushing headlong into an industrial-funk chorus, it's an unexpected but fitting end to this set.

With 13 tracks, "Crooked House" clocks-in at just under an hour. Lyrics may be found on the band's website, dachshundband.com.

Dachshund is an adventurous garage-rock band from Tulsa, OK. Like a misguided musical version of Han Solo, we smuggle art-rock ideas into pop-songs.

Never a choice provided
Straight were the stalks
where crooked I grew
Taught of the evils of my way...

Sharp like a birdcall
Sweet is the ache
I sink below
A river of stones I hide away...

Please tell me how
I'll make it out
though beaten and
I'm broken
My long escape
This landlocked state
can't hold me in
-- I flood my banks!

Secrets, they move so swiftly
Over these
undulating hills
Just like the whispers of the leaves

Fences of barbed-wire
Crossing my heart
lay claim to the land
Leaving no country free to roam...

Please tell me how
I'll make it out
though beaten and
I'm broken
My long escape
This landlocked state
can't hold me in
-- I flood my banks!
Track Name: The Wedding Guest
THE WEDDING GUEST

Come one-by-one,
in ribbons they're paired and bound
leaving the cynic tied to his time
in solitary
Each lonely night whispering:
You're not as young as you been...

Each season's invitations arrive
in envelopes of white
with a script so nice and
nearly illegible
and so
it comes to haunt me again
this piece I know I'm missing...

In black-and-white I stand
These confining colors
never could be mine,
rigid their design.
Expectation's friend,
love be in your favor
and may it long be true
when you say I do / I do...

Come two-by-two,
they're marching in common time
held forth before the altar of pride
and ceremony
Already pictures unfold...
Some life that I'll never know...

In black-and-white I stand
These confining colors
never could be mine,
rigid their design.
Expectation's friend,
love be in your favor
and may it long be true
when you say I do / I do...
Track Name: We Fall
WE FALL

It's hard to cope with an ordinary day
traffic, job, and wife get to me
all I want is to blow away my mind
If I don't have to think, I'll be fine.

Happily we fall
to our doom below

And no one would care
even if we're told,
"You listen to much
to the TV and radio"
We're too drunk and stoned,
stuck in our excuses.
Track Name: Only In My Dreams
ONLY IN MY DREAMS

Flowers
turn their heads when you walk by
Worlds
spin around you in the sky
Time
is a precious luxury
Why not
share a little bit with me?

All of the hours I've spent running around
So many fishes in the sea
Where can I find you when the sun has gone down?
Only in my--

Until I see you in that space in the light
A smile could bring me to my knees
I know to hold you could only be right,
'cuz you, you're in my--

You
You're
In my--
Track Name: Gary
GARY

In a tangle of unstrung plans
you tumble out of the blue
with bitter words and an empty hand
Heaven smiles on all but you.

All your guns are arranged,
ah but who are you fighting?

You take the street
stumbling
kissing the ground
you want it all
or nothing
until you get loaded and shoot yourself down
throwing your stones
at houses of friends
willing the world
to come crashing in!

She left you for your closest friend
Don't you know, they're all the same?
Give you something you start believing in,
leave you standing like a... a dog in the rain.

All those heartless things she said,
you just turn them 'round now
into curses that you spit
anywhere you fall

You hit the ground
spinning
cast to the air
awaiting arms to catch you
and that's when you find out there's nobody there
What good is love, then,
so painfully lost?
You count it as worthless,
but Gary, it's not.

Fall down
And get up again,
oh!

You ask too much!
You kill me!
You take it too far!
You wanna know what I think?
You best start learning to live with yourself.
'Cuz the fight's never over
though battles be fought,
And morning comes sober,
ready...

Or not.
Track Name: Vices
VICES

I may sit quiet
quietly here
but that doesn't mean I know not
what you do over there.

I let my thoughts go
wander through the shadows
where the imps and the demons play
where your poisons are grown and made.

You will see what you see
and believe what you must
How you react about today
will determine your destiny.

Slyly, silently
we slip around so secretly
wily and conniving
We'll poison and distort everything

The promises you may have made,
we'll take their importance away
We poison minds and destroy weak lives
We are the liars.

You will see what you see
and believe what you must
How you react about today
will determine your destiny.
Track Name: Stain
STAIN

Let the rain wash away
the iron stain of DNA
laid so neatly beneath our feet.

Every moment
I shrink a little more
wash it all away
the erosion of the core.
time disintegrates,
the wind blows the rest away
from that little place
where it all died that day.

Capitulation no heart will find,
the terms now given from the mind:
Cease all beating, no love will grow there.

The shadow's shape keeps taunting me
remnants of hope that used to be
imprisoned in there are broken pieces of me.

Every moment
I shrink a little more
wash it all away
the erosion of the core
time disintegrates
the wind blows the rest away
from that little place
where it all died that day.
Track Name: Flowers Bloom
FLOWERS BLOOM

Reach for
dreams of
impossible, we must.

Creeping crawling silent stalking
in these darkening woods they’re calling
peering eyes are prying poking
waiting for when there’s an opening
I’ve too many enemies no way of knowing when it’s coming
shifting swaying pause for listening
feel them moving I’ve got nothing.

Making deals in faintest whispers
protecting me, the Devil’s worst creatures
when they come to take the bounty
one soul gone, this choice will haunt me.

B: I promise you heaven.
L: Is all of it for me?
B: No, you can bring your friends along.
Both: Just wait until they see!

B: Here comes your heaven!
L: It looks just like the sea!
B: So go ahead and dive in…
L: Will it set us free? / B: Let it set you free!
Track Name: Vigilance
VIGILANCE

Sleep well, my child
let your dreams flow naturally
We listen at night
We watch your everything.

I hear your prayers
I know your fears
I soak up your tears
I sit with you through the nightmares.

Time until you're laid to rest
Holding out, another knows best
So afraid / "I'll be over, oh, if I try."
Fall asleep, kiss another goodbye.

You got a long history
of being what you are
Don't have to wonder why
Ain't no river there to cry
Every word you sing
it's the same old song
and it rings so true
'cuz it's what you are.

All the people down in Hell
watch you tend your prison cell
Eye the key -- is it all of your own design?
Weight of the world, or the weight of your mind?

You got a long history
of being what you are
Walk any way you want
you'll never be what you are not.
Wear the velvet chic,
or the feathered tar,
it's gonna show right through
'cuz it's what you are.

You got a long history
of being what you are
Don't have to wonder why
Ain't no river there to cry
Every word you sing
it's the same old song
So better get that clue
and give 'em what you are.
Track Name: Factory
FACTORY

i call her down

Factory-direct! Anatomically-correct!
I've heard all about your love now now
Don't let me down!
I live in a factory!
The forces of demand ain't hard to understand
when you're the supply I need yeah yeah
I'm putting the pieces together
Don't let me down no no don't let me--

Bandcamp Daily  your guide to the world of Bandcamp